Tallahassee to Atlanta for TMBG

It's been forever since They Might Be Giants came to Tallahassee.   I found out in December that they would finally be making an appearance in March.  I wanted to take my kids, who are fans of the three kids CD/DVDs they have put out.  I found out the minimum age was (I think) fourteen to get in.
I knew they did kids shows from time to time, so I looked at their other shows going on around the same time and located a kids show in Atlanta the following weekend. 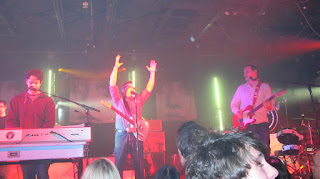 So the Tallahassee show as a lot of fun.  It was kind of weird seeing the crowd.  I first saw TMBG when I was in middle school, and I don't think there were too many people older than I am now at that show.  This time there where only a few people who looked like they where probably in high school.
They even played the one song I was looking forward to, which is She's An Angel.
They played a good number of music off of their kids album.  It was a good marker to see who was a parent in the crowd, as only few people could be seen singing along.
Another really great thing about this concert is that both Kim and I were able to go ... TOGETHER.  It was awesome.  we never get time together to do anything that's just fun for the two of us.  I love going places with my kids, but it is nice for just Kim and I to do something awesome together every one in a while.
The following Friday I got my Vanagon cleared out, and most of our stuff packed for the trip.  I packed enough food so that we would have to stop along the way either.
One rather scary thing about this trip was that I had never driven my Vanagon more than around sixty miles outside of Tallahassee.  I was planning on driving there and back in the same day, an almost 600 mile trip.
We took the US27 route to avoid Interstates, and perhaps see some cool small towns. 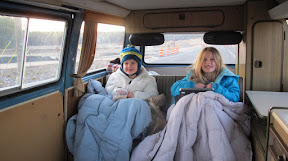 The morning was cold, and the bus has no  heat, so I packed lots of blankets, which Aurora said didn't make her warm enough.  I had the car DVD player setup as well, and we started the trip with Teenage Mutant Ninja Turtles, Athena's pick.
The van ran great on the way there, and the girls ate the sandwiches and apples I packed for them.  We made it the whole way stopping only for gas, and odd looks at the van from the locals.
The van ran great the whole time, and was actually able to maintain speeds up to 70mph, when not going up a hill, which is pretty good for one of these vehicles.
We arrived twenty minutes before the show started, to the discovery that the show was soled out.  I felt pretty dumb.  Reminder to self, don't drive the kids six hours away for a show you don't already have tickets for.  The lady at the box office told us to come back when the show started to see if there was availability.  Indeed there was and we had entry.
The security guy made me go back to my car to leave the camera.  Note number two, keep camera in pocket when trying to get it into a show.  Other parents didn't have their camera on display upon entry and where snapping photos of their children and the band the whole time.
They Might Be Giants where much more into this show than the one in Tallahassee.  There was a lot more energy on stage.  It was really cool to see a packed room with children and their parents singing and dancing along to TMBG.  As a function of parents who get their kids into good music, it was obvious most of the parents there where pretty awesome parents, which is something I can't say for most places I go to take my kids for children's events.
Aurora was tired and sat down for the whole show.  Athena spent most of the times either dancing, or in my arms watching the band.  Towards the end of the show Athena made a friend and danced with her.
The kids favorite part started during the song bed.  At the end of the line "and so directly to bed I go" a canon shot out papier-mâché over the audience.  The kids where really thrilled to catch the falling pieces of paper.  This happened a few more times throughout the show. 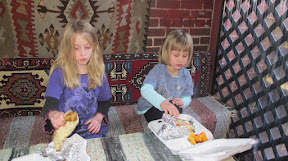 A sock puppet, called "The Avatars of They Might Be Giants" did a show and sang a couple of songs, which the kids thought was pretty funny too.
After the show Flansburgh handed out stickers, which we all three got, and I followed up with receiving a high-five from Flans.
Afterwards we grabbed some Greek food, and headed home.  The DVD player seemed to have broke itself while we were at the show, so there where no movies, or any other entertainment, for the drive back.
Athena fell asleep first, and Aurora went out only later on in the night.  We got home around 11:30pm, and I was quite famished from the day.
Posted by maxolasersquad at 1:56 PM No comments:

Cell phones have created some weird social norms.  The most commonly brought up weird thing that people do with their cell phones, is use them while sitting on the toilet.
A more annoying trait of cell phone addicts is how the people on their phone get precedence over anything happening in their immediate surroundings.  This can range to the fellow motorists on the road, or the person standing in front of them carrying on a conversation.
Today I was talking to a guy at work (who is an exceptionally nice person by the way) and he gets a phone call from a friend.  Our conversation immediately came to an end so he could talk to his friend on the phone.  A little perturbed, I drew up the above comic to make me feel better.
I come up with comic ideas somewhat frequently, but I rarely have the time to make them a reality before I forget the idea.  This one came to me during my lunch break.
Posted by maxolasersquad at 12:44 PM No comments:

Today I installed the latest alpha of Ubuntu 10.04 Lucid Lynx Alpha inside of VirtualBox.  After getting all of the updates I installed the VirtualBox Guest Additions.  Upon boot my screen flashed lots of fun colors and then told me that my display configuration was fubared.
I booted up in low graphics mode and then searched for the answer, which I'm going to repeat here.
After installing the guest additions you need to modify a file.

Replace line 90 with the following:


So anyways, this got me as far as logging in without the graphics dying.  However, it looks like Compiz gets enabled and kills everything.  I'll update if I find a solution to this.

Edit: Bug 6198 is fixed as of VirtualBox 3.1.6. To get it for Ubuntu add the VirtualBox PPA found at http://www.virtualbox.org/wiki/Linux_Downloads and run sudo aptitude install virtualbox-3.1
Posted by maxolasersquad at 5:00 PM 15 comments: 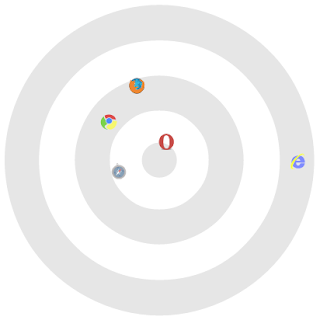 Source: http://blog.chromium.org/2010/03/does-your-browser-behave.html
The image above graphs how well a browser conforms to the ECMA standard.  The ECMA standard defines how a browser should execute JavaScript code.  JavaScript is very important in the development in interactive web pages, and helps blur the lines between a web application and a desktop application.
The close a browser is to the middle, the more in line it is with the ECMA standard.  The closer a browser is to another browser, the more its JavaScript engine is like the other browser.
Conforming to standards is important to web developers because it means we can write code once and it will run anywhere that supports those standards.  When different browsers behave differently, it means we have to know what those differences are and code around them if we want to ensure our user-base can use our products regardless of platform.
Notice IE sitting way out there on the edge far away from everyone else.  This should give non-developers a good idea what the life of a web developer looks like.  When I write web applications, I do all my initial testing in Chrome.  Chrome has a lot of good developer tools built in that make troubleshooting easier.  Once I am done getting everything working right I fire up Firefox and make sure I don't have any missing or broken functionality.  I almost never do, so I then up Internet Explorer.  Things start getting really interesting at this point.  I have to start hunting down each problem, looking through the code, and hunt down what it is about my code that IE doesn't like and begin writing exceptions.
The problems with IE go well beyond how it implements JavaScript, but I won't get into that.  Make your web developers happy and use anything but IE.  The day we can stop coding for IE, or at least get IE on board with the rest of the team, web developers will be able to kick out awesome web applications much faster.
Posted by maxolasersquad at 11:48 AM No comments:

I wrote before about the ineffectiveness of hand sanitizers.  Slate has a new article reiterating in more detail why relying on hand sanitizers is not an effective way to fight off the flue, or H1N1.
Without getting into a lengthy post, I'll summarize.  If you want to prevent illnesses, wash your hands after using the restroom, before cooking, before eating, or any other sensitive situation as such.  If you have a need to ensure your hands are clean, wash for twenty seconds with soap and warm water.  Don't use hand sanitizers, wipes, or any other such cleansers unless it is absolutely the only thing you have available.
Lastly, eat the right foods and keep a positive attitude.
Posted by maxolasersquad at 10:34 PM 1 comment:

So this lady's blog is awash of right-wing fear mongering, but I do agree with her on this one.  She makes a simple point that race and nationality are not one and the same.  The post is at http://michellemalkin.com/2010/03/09/my-race-is-american/
I have made this case before, and I really like her solution to this problem when answering the census, list your race as American.  There is no sense in only allowing white people to call themselves American, while leaving everyone of different races with a different name.
Posted by maxolasersquad at 10:02 PM No comments: